NSA sedition and treason
against the Constitution and the American people

Make the punishment fit the crime... 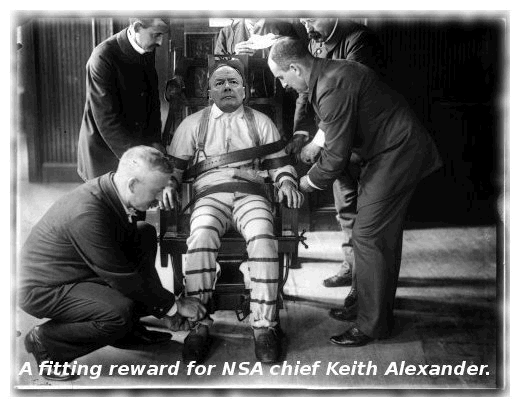 NOTE: As of April 2, 2014, Keith Alexander has been replaced by Michael Rogers as director of the NSA. This site will be updated to accomodate the new information as time permits.

They spy on every telephone conversation and email sent in the United States. They have deliberately worked towards weakening the encryption standards used to secure our most sensitive electronic transactions and communications. They secretly scan the contents of the online calendars and address books used by United States citizens. They covertly store and analyze this data in huge, secretive data centers. They intercept computer shipments in secret to plant spyware. Are we talking about a cyber war being waged by an unfriendly foreign nation? No. We are talking about our very own National Security Agency (NSA).

The 4th Amendment of the federal Constitution clearly states: "The right of the people to be secure in their persons, houses, papers, and effects, against unreasonable searches and seizures, shall not be violated; and no warrants shall issue, but upon probable cause, supported by oath or affirmation, and particularly describing the place to be searched and the persons or things to be seized." What this means is that the federal government is barred from conducting en masse fishing expeditions looking for evidence of wrongdoing. We, the American people, have the unalienable right to be secure against such governmental transgressions. 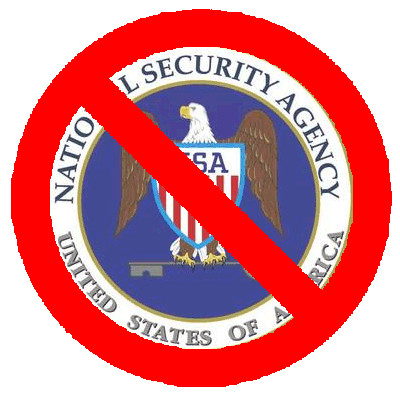 They say "Trust us, we will not abuse this power" and "We need to do this to make you safe,", but the U.S. government has a very poor record when it comes to the promises and claims it makes when justifying any of its actions. Let us examine a few of the past justifications and promises made by our federal government: 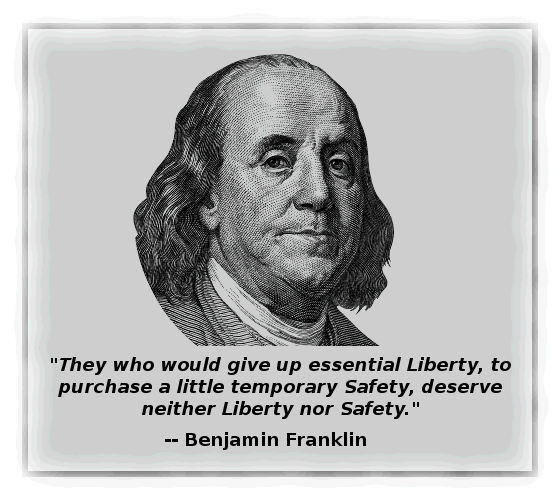 What this tells us is that even if for the sake of argument we say we can trust the reasoning and intent of our current leaders (and we can't!), we cannot trust what will be done with this far-reaching police-state appartus in the future. (Imagine what a Hitler or Stalin would have done with such capabilities!)

By its actions in undermining the Constitution, the NSA has for all intents and purposes declared war against the American people and against that Constitution which it is sworn to uphold. The agency is out of control, is guilty of both sedition and treason, and has become the enemy within, erecting a police state infrastructure that goes far beyond what even George Orwell imagined in his wildest dreams.

There can be only one appropriate response to this unprecedented attack on the Constitution and the American people. Those reponsible, such as Keith Alexander and James Clapper, and others at the NSA and in the intelligence community, who planned and implemented these outrages must be brought to trial for sedition and treason; upon being found guilty they should be executed. 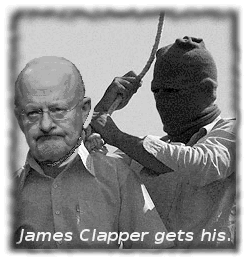 There is more to come, including details on NSA atrocities as they become public and an online petition demanding that the Justice Department put these thugs on trial for their treasonous acts against the American people.

In the meantime, you can write your Congressional representatives and the Justice Department to put pressure on them to bring these brigands to justice. Click here to find your representatives in Congress. Note that written letters sent via U.S. mail generally carry more weight than email or phone calls.

Click here for a sample letter to Congress that may be modified for your own use. Information regarding the U.S. Department of Justice may be found at www.justice.gov.